Hyuna Shares Her Thought on Her Sexy Image

Hyuna famously known as one of the sexiest artist in K-Pop, as her performance is quite racy, and the fashion style is more toward revealing her body. She used to be part of “4 Minute” girl group which disbanded in 2016 and now, Hyuna is preparing for new project called “Triple H” where she will be making her comeback with PENTAGON’s E’Dawn and Hui on May. 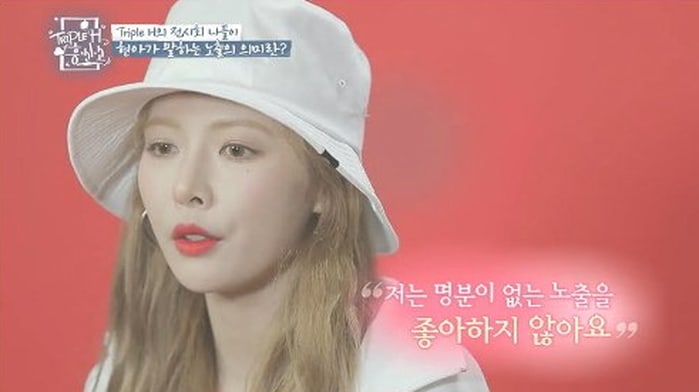 During broadcast of her new reality show “Triple H Detective Agency,” Hyuna recognized and realized her sexy image and revealed her thought on getting exposure due to her racy outfit and performance. Hyuna believes that her skin-revealing act is part of the art in music, and she expressed the injustice perspective when it comes to nudity in music.

“I know I’m going to hear a lot of things about me exposing skin, but that’s something I need to accept. I don’t like exposing my skin without justification. Nudity in dramas and films may be justified, but when I’m performing on stage, exposing my skin somehow isn’t to some people.” – Hyuna

Experts in K-Pop labeled Hyuna the next generation sexy queen of K-Pop after Lee Hyori and Uhm Jung Hwa. The label didn’t come to her without justification as everything that Hyuna wears will become sexier, and she was proud with the achievement because for her, it shows that she can bring new colors and dynamics to her image.

6 Idols Who Decided to Drop Out from Their Grup