A Gentleman’s Dignity is popular Korean drama series which have a lot of fans due to it’s cast and performance delivered by the actors. This is really interesting series you need to watch especially if you are a K-Drama lover. Adopting romantic comedy genre, this drama consists of 20-episode long with every one of them is very intriguing to watch. You might ask why do we recommended this drama over thousands other title in K-Drama, it is because this particular series got attractive story, great performance of the actors and actress, enchanting soundtracks, and many more. This drama catch the attention of public when they first announced the cast and later on when the series air on TV the show  keep on getting more popular and popular. Considering A Gentleman’s Dignity aired in 2012, this is an old drama, but WE LOVE IT ANYWAY. You might find yourself needed to find a way to watch this series after reading our review. Let’s get it on.

This Korean drama series are parted in 20 episodes, here we are going to talk about them all in one brief review. A Gentleman’s Dignity is stories about bromance and 20 year friendship among the 40 year old friends named Im Tae San, Lee Jung Rok, Kim Do Jin, and Choi Yoon. 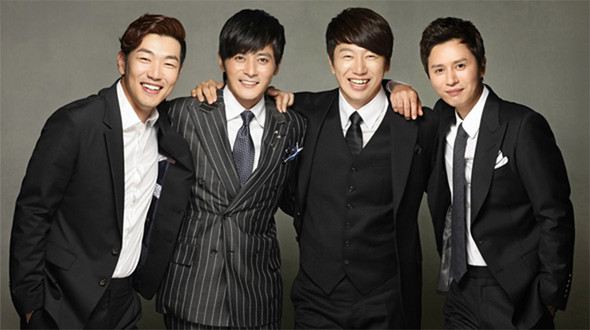 The 4 friends who are in their 40’s is looking for the eternal love and trying to settle with their life. All the member of the 40’s gang have their own to struggle over their loved one, the complicated love stories will be scrambling and testing their long-last friendship

That is actually complicated and Yi Soo could only conceal her feeling without expressing it to Tae San. In fact, then Do Jin knew her feeling. While Jung Rok is trying to be faithful to his wife and Choi Yoon is starting to grow feeling for Im Tae San’s sister. It’s a complicated love stories with touches of comedy scattering over the plot.

Groups of A-Class renowned senior in the industry is playing the important cast member in A Gentleman’s Dignity supported by rookies which at that time really starting to gain attention.

A Gentleman’s Dignity gets 8.2 out of 10 by IMDB users, that’s quite high enough for romantic comedy genre. The rating in South Korea started quite cold for the series even though it still rated at 12% – 15%, things turned warm for A Gentleman’s Dignity after 1oth episodes which the rating goes through the roof with peaking at 30%. The drama got good reception throughout the continent, with several countries asking for international broadcast right from SBS. The countries such as Thailand, Japan even Venezuela and Ecuador, this really proves the popularity of the series.

The tone of this drama is light and simple, the drama drive around the story without going too deep on it. The resume of the actors is quite impressive as they are respected senior in the industry but don’t expect that kind of performance here, except for Jang Dong Gun who play Kim Do Jin that proves his capability by *sometimes* acting with his eyes.

The plot is complicated in words but simple in the series, if you are in for a relax-popcorn kind of series which you can enjoy without too much thinking, you HAVE to watch this K-Drama. Overall, this is a totally fun drama supported with simple but good storyline, great performance from the cast, modest conflict and relationship. The original soundtrack is also another key point which boost the popularity of the series. Last word, try to let loose and not to try to think too much while watching this drama, you will be surprised by how amusing this series is.

Funny Korean Movies that Will Make You Laugh Hard

Three Must Watched Drama of 2017 [Underrated]