KMazing – Bangtan Boys or BTS is one of the most famous idol groups which debuted in 2013 with a single titled No More Dream. BTS is currently under the Big Hit Entertainment and has seven members, RM, Jungkook, Jin, Suga, V, J-Hope and Jimin.

For those of you who didn’t know BTS – we doubt that – the group is known for its huge fan base throughout the world. Their fans were given the nickname ARMY and came from the abbreviation Adorable Representative MC of Youth is always increasing in number. This is then become one of the reasons why BTS is well known. 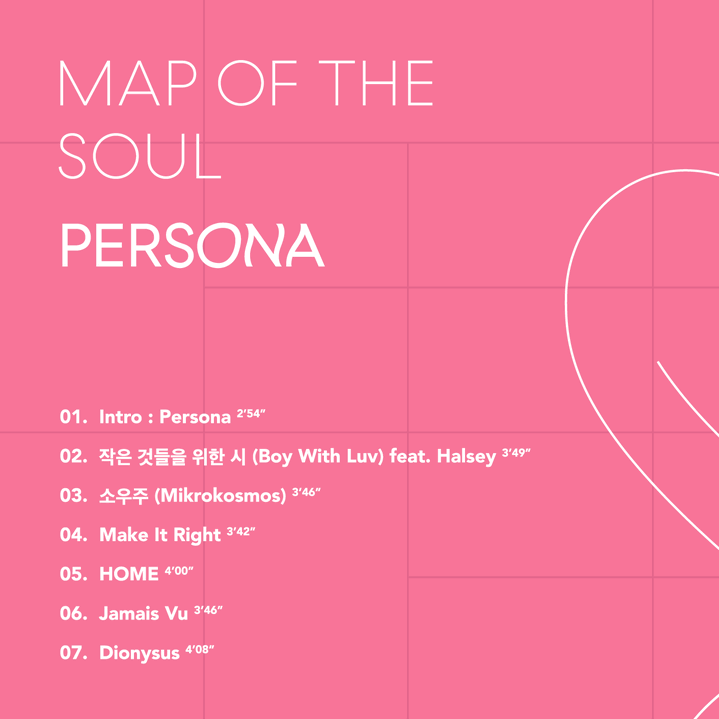 Early this year, BTS released its latest album titled Map of the Soul: Persona with Boy With Love featuring Halsey as the title songs. The music video of the song has been watched regarded as the most views K-Pop video in 24 hours of release. In addition to Boy With Love (feat. Halsey), there are a number of songs which also included on the albums such as:

The second song was Boy With Love (feat. Halsey) which became global hit compared to other songs on this album. This song has a funky pop stream that will enchant its listeners. Boy With Love is indeed made softer and sounds more cheerful because it tells a man who is flowering from the feeling of falling in love. It’s not that I don’t like the other artist that has been featured on BTS’ song but I kinda feel that Halsey’s voice got the best range for the vocal line of BTS. In my humble opinion, I do think that this song is the symbol of the global brand that has been tagged on BTS.

Next, we got Mikrokosmos, which has a pop-rock genre that presents a rhythm that is easy to follow. The members of BTS might sound like they are not trying hard but this is the vocal technique that is suitable for the tempo and melody of the sound. They need to embed their voice into the music and go with the flow, which is hard. Mikrokosmos describes that each individual is a precious star like a microcosm that shines beautifully like a city lamp in the night.

Make it Right starts up with synth which is a nice break, and the repetitive beat of the synth is actually the backbone of the song. It might sound kinda repetitive but here, the vocal range of the member is coming right up to save the song from boredom. A piece of music that is full of creativity.

The next track is HOME, the song presents an old school 90s music which is a lil bit overused this day. Lyric-wise the song is solid plus the presentation of the member which is good but the beat and rhythm of the song are too common for my taste.

Also Read: 10 Ballad Songs that You Need to Listen After A Break-Up

Jamais Vu is taken from French which means fear of doing something even though it has already happened, the song pictures the best representation of its title and with a lil bit of ballad in the middle, the song is easy to listen.

Last, we got Dionysus with the old school hip hop genre which is solid as it accompanied with heavy bass and compact drop. But I kinda feel that the music and the beat are overburdening the voice of BTS’ member.