KMazing – The leader of new generation of girl group in K-POP is here guys, TWICE finally released the MV for their comeback track “Signal” on May 15. The girls make their showcase via Naver’s V app introducing behind the stories and share their thought with their fans during the show that broadcast live via Internet. 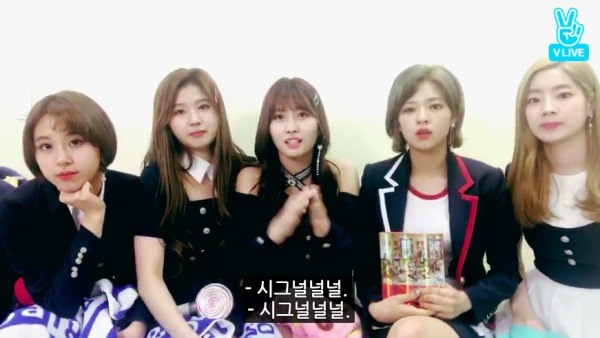 The showcase start with the member of TWICE performing their hit songs, later on they introduced themselves one by one. The nine group member of JYP Entertainment revealed the story behind the special thing on May 15 where the track was released. Dahyun said that “It is the first song our ‘teacher’ [Park Jin Young] made. That is why our comeback date is also Teacher’s Day (May 15),”

They also share the behind story on one of the song on their comeback album titled “Signal”. Jihyo [The leader] said that “Chaeyoung and I took part in writing the lyrics for the song ‘Eye Eye Eyes’ in the new album, We tried to express the mind of a girl who fell in love in the most loving way.”

The MV tells the story of TWICE member trying to get attention of the alien by sending him (?) a signal through various super power that the girls have. The song is quite different from the usual melodic TWICE music, but it’s a catchy song nevertheless. Check out the MV here !