KMazing – Yesterday, the oldest member of Big Bang, T.O.P was rushed to emergency service due to what appear to be overdosed effect on his anxiety medication. The police released statement regarding T.O.P condition and “simplify” the condition by saying that the suspect of marijuana abuse is stable and he is “asleep”, the police also stated that he will be back in normal condition in one or two days later.

But the “simplify” version of the news was contradicted by the report from YG Entertainment, which stated that T.O.P condition is far from stable, and they still need more information before releasing their official statement. Due to the conflicting statement, finally the medical team from Ewha Woman University Hospital who took care and handle T.O.P’s emergency condition yesterday, held press conference in which the core of the event is to formally inform the condition of T.O.P. 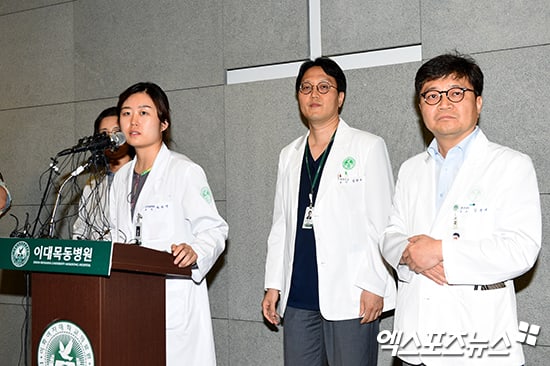 The press conference was attended by several professor who took action in treating and expertise in the field connected to the related condition that the patient (T.O.P) has.

“He came on June 6, 2017 at 12:34 p.m. KST. He was carried in by three people, with one holding up his upper body while the other two were holding up the lower half of his body. Our emergency medical technicians examined him and found that the patient was between a state of deep sleep and semi-consciousness with contracted pupils, only showing a reaction to strong stimuli. In addition to an increased blood pressure and heart rate, T.O.P was also suffering from unstable breathing due to low levels of oxygen and high levels of carbon dioxide. We conducted the necessary emergency medical care as we believed he was in critical condition. He was admitted to the intensive care unit at 4:50 p.m. KST.

After conducting a urine test, we concluded that the patient was suffering from respiratory depression due to an overdose of prescribed tranquilizers. His condition led to a high occurrence of respiratory failure, so we made the decision to treat him in the emergency intensive care unit, as he may require intubation. We were able to control his carbon dioxide levels, but he is still in a state of severe lethargy.