KMazing – Moon Lovers – Scarlet Heart: Ryeo is a K-drama of 2016 that took the path by following the genre of Fantasy, Historical and Romance. Aired on SBS, the series directed by Kim Kyu-Tae and the storyline was written by Jo Yoon-Young. The cast of the series are Lee Joon Ki plays the role as Wang So, IU acting as Hae Soo and Kang Ha Neul took the role of Wang Wook. Moon Lovers – Scarlet Heart: Ryeo premiered on August 29, 2016 on the SBS channel and is scheduled to air every Monday and Tuesday at 22:00 (KST) every week. 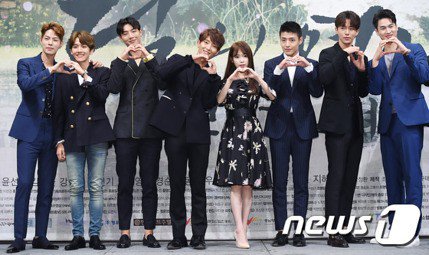 Adapted from Chinese novel entitled “Bu Bu Jing Six” written by Tong Hua, the novel published online in 2005. The production process of this drama has been completed before airing, which is produced from the beginning of 2016 until the end of June 2016. The drama story takes time at the beginning Goryeo regime.

Hae Soo (IU) is a 25-year-old girl from the modern era who returned in the era of the Goryeo Dynasty and was caught up in the conflicts and prince struggles inside the palace. There, he falls in love with Wang So (Lee Joon Ki).

Wang So (Lee Joon Ki) is one of the most feared people in that era who is the fourth prince who later became the king of Goryeo with title Gwang Jong.

Wang Wook (Kang Ha Neul) is the eighth prince born with the fourth prince (Wang So) but from a different mother. Later on he is in love with Hae Soo (IU) when he already has a wife who loves him very much.

It’s a bit too much princes in one series. I do know it’s all for variation purposes but the thing is they are just distracting the main character from the main plot which in my opinion stretch the drama to the extend of boring *there I said it*. If any of you guys love melancholic story that took background in historical era, then this is for you.

Plot and Profiles of Forecasting Love and Weather KDrama Cast

[Drama Review] First Impression on “The Liar and His Lover”