KMazing – “Introverted Boss” is a drama directed by Song Hyun-Wook, and the story was composed by Joo Hwa-Mi. The television series is starring Yeon Woo-Jin, Park Hye-Soo, Yoon Park, and Gong Seung-Yeon. Introverted Boss (내성적인 보스) which adopted romantic comedy genre was aired on TvN started from 16th of January 2017. 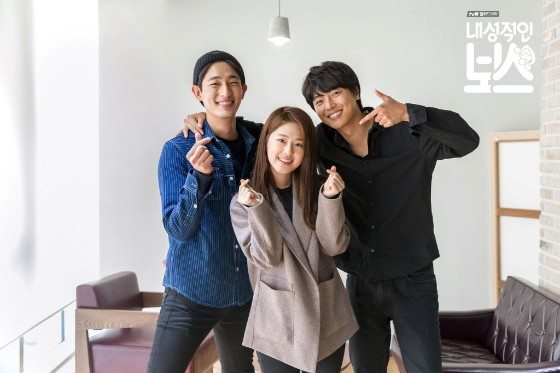 Plot of The Story

Being in the scope of work related to public relations of course demands a lot of openness and extensive meeting with others. But this is different case for Eun Hwan-Ki (Yeon Woo-Jin). The man who served as chairman or CEO of a public relations company called Brain, he is a man who is very introverted. Not only introverts, but Hwan-Ki has a very extreme social phobia so he chose to live detach from the outside world.

His closed-mindedness toward the outside world provoked many strange rumors about him. The employees in his office called him Monster, many of whom believed that the very CEO of Brain was due to his ugly looks and psychopaths attitude. Rumors are also circulating, if meeting Hwan-Ki and looking into his eyes then that person will petrify. Then how does he run his company?

Eun Hwan-Ki has a good friend named Kang Woo-Il (Yoon Park), this guy is the complete opposite of Hwan-Ki. He is handsome, very confident, has good communication skills, and is highly respected by his employees. In short, Kang Woo-Il is the face of Brain. He is a tongue-tongue connector between Hwan-Ki and his clients. Moreover, he is also a prospective brother-in-law of Hwan-Ki, Kang Woo-Il has been engaged 3 years with Hwan-Ki’s sister.

As an introvert, Eun Hwan-Ki enjoys activities that can be done alone. From sports to hobbies, his passion for opera or musical theater. Hwan-Ki himself is huge fan on one of the opera actress called Chae Ro-Woon (Park Hye-Soo), he always watch and send her flowers on every staging but never dared to meet her directly. Until then one day Hwan-Ki ventured to meet directly, but Chae Ro-Woon has resigned from the stage opera.

This kind of drama intrigued me at first, social phobia ? and public relation plus a lot of fresh new faces in the industry ? I gave it a try and I get the hook of it during the first episode. The story was going steady and fresh throughout the first episode, but then the revelation of the important character is a bit long, the story itself is good but the extend of character inside the story is a a bit boring for me. The character build that attached to the plot is a bit to bland compare the narrative itself. Still, It’s simple and good romantic comedy drama with a lot of fresh idea pour into it.